Bzzz ! Le son de l’électricité is a sonant sculpture that tries to make the sound of electricity listenable through an installation.

The sculpture has a radiating form, organized around a sound-wave generator placed on a stand in the middle of the room, surround by a group of 24 loudspeakers affixed to microphone stands. The generator is connected to the loudspeakers with a bundle of audio cables that go across the space from bottom to top and form a sort of tree, staging the path of the electric currents. The electrical and electronic elements are entirely visible here, forming the very essence of the aesthetic of the piece.

The signal generator is made in a deliberately rudimentary way: it is composed of some basic electronic components that allow the manual modulation of the electric current and thus the generation of slightly amplified sound frequencies. Six simultaneous sounds are thus created and distributed throughout the space.

The device invites the spectator to walk inside of the installation, from one loudspeaker to another, from one sound to another, and to test their frictions and combinations. Since the electric tension is not constant, the sounds played on repeat form a unique composition each time.

By reinventing a generator of low-tech and obsolete wave forms at a time when everything is digital, this sculpture takes part in a reflection on the history of technology, and attempts, in its own way, to pay homage to analogue sound without sampling or processing, the sound of electricity.

Cécile Babiole (1956-) is an artist who has been working since the 1980s in the field of music, first, then in electronic and digital arts. She connects visual and sonant arts in her creations through installations and performances that question the media with originality and irony. She questions technology and attempts, in a roundabout way, to transpose its standard uses into the field of creation. Cécile Babiole appropriates a mechanical register and mass culture to produce a confrontation between creativity and determinism, past and present uses, obsolete and contemporary techniques. 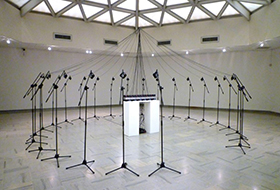