This installation, between artistic discourse, activism and documentary, offers a reflection on the history and evolution of the representation of AIDS and the manner in which it gets hidden.

The work is made of numerous artifacts. The central piece is a large screen in permanent rotation on its axis, and one of its surfaces is a mirror. Texts in numerous languages, testimonies, theoretical essays or critiques dealing with AIDS are projected onto it and reflected throughout the room. The texts are principally projected onto a black background but occasionally also onto close-up photos of tattooed skin, or onto the façade of a house that has been tagged with serophobic graffiti. They scroll past at different rhythms, then break up. The spectator can often only distinguish fragments from it.

Our immersion in the work is accentuated by the musical composition diffused throughout the piece, made up of sounds of protests, voices, honking, and electronic noises. Personal and engaged testimonies on the disease and on the daily experience it causes can also be listened to on headphones. On the wall, a frieze of photographs from personal albums show people, sick or not, in banal situations, far from the stereotypes of photographs from the documentary art that put the disease on display.

This piece addresses the sickness in a discursive mode. It explores its representation through the prism of different interpretations and the crisis of language and words it brings about. The discourses on display, sometimes cold and factual, sometimes intimate and radical, coexist without blending. By confronting these two types of discourses, yann beauvais delicately and discreetly denounces the direct consequences of this mercantile and sensationalist vision of the life of sick people and insists on the power that words and images can have.

The work, devised to have multiple modes of transmission – it is for seeing, for hearing, for reading – places the spectator at the heart of this problem. Solicited from all sides, we feel as if we are a part of the whole. Seeing our reflection in the mirror, and the texts reflecting onto our body, reinforces our involvement.

Tu, sempre, made in 2001 at La Criée, the contemporary art center of Rennes, was the result of the collaboration between yann beauvais and Thomas Köner, a musician, video maker, and author-composer.

yann beauvais (1953-) is a filmmaker and critic specialized in experimental cinema. In 1982, he and Miles McKane cofounded Light Cone, the most important European cooperative for the distribution of experimental cinema, dedicated to its creation, distribution and conservation. He himself explains that the common trait in all his films is that they are constructed according to the following principle: “fragility” – “disappearance” – “collapse.” 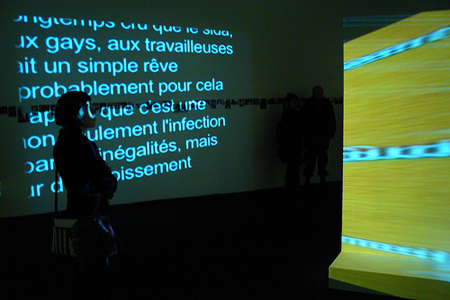 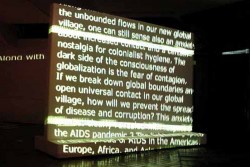 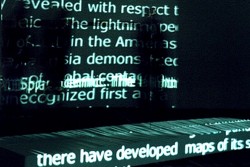 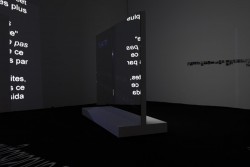 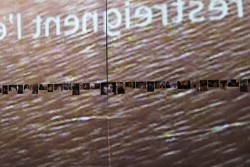